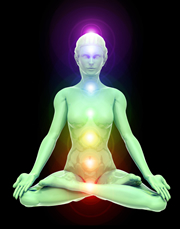 Chakra is a Sanskrit word, which means a wheel. There are countless numbers of chakras in the human body. In fact every cell of the body is an energy centre but out of all, seven are considered as main energy centres or chakras. These seven chakras are located in a straight line along the spine, beginning at the base of the spine and finishing over the top of the head. They keep rotating and generating energy, which looks after physical, intellectual and emotional functions of our body, mind and spirit. This energy is perceived as light by the spiritual eye.

Each chakra has a colour and an element of nature associated with it. The colours are in the order of the rainbow colours beginning with: Red, Orange, Yellow, Green, Blue Indigo and Violet.

Each chakra vibrates and rotates at different speeds. The root or first Chakra rotates at the slowest speed and the Crown or Seventh Chakra at the highest. All chakras should be in harmony with each other. A chakra may start moving too fast creating excessive energy or too slow creating deficient energy or may get altogether blocked. These three conditions are not normal. If the flow of life force energy through a chakra is blocked, the results will be opposite to the functions of that particular chakra.

The imbalance may occur due to external and/or emotional causes like accident, grief, emotional shock due to sudden news whether sad or happy, financial loss, fear, anxiety, betrayal, failure in love, over reaction to a situation, etc. This imbalance can disturb the energy pattern, resulting into physical, emotional and/or psychic ailments and disturbances, but not only that, disease may manifest, the thought process and the very psyche may get disturbed. A constant balance between the chakras is therefore needed for good physical, mental and spiritual health and well-being. 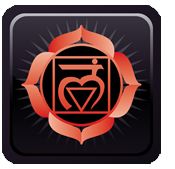 Base – Chakra One
Earth, Physical identity, oriented to self-preservation: Located at the base of the spine, this chakra forms our foundation. It represents the element earth and is therefore related to our survival instincts, to our sense of grounding and connection to our bodies and the physical plane. Ideally this chakra brings us health, prosperity, security and dynamic presence. 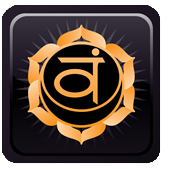 Sacral – Chakra Two
Water, Emotional identity, oriented to self-gratification: The second chakra, located in the abdomen, lower back and sexual organs, is related to the element water and to emotions and sexuality. It connects us to others through feeling, desire, sensation and movement. Ideally this chakra brings us fluidity and grace, depth of feeling, sexual fulfilment and the ability to accept change. 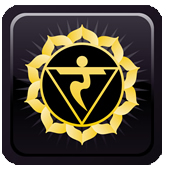 Solar Plexus – Chakra Three
Fire, Ego identity, oriented to self-definition: This chakra is known as the power chakra, located in the solar plexus. It rules our personal power, will and autonomy, as well as our metabolism. When healthy, this chakra brings us energy, effectiveness, spontaneity and non-dominating power. 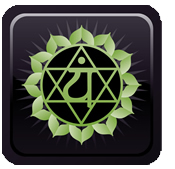 Heart – Chakra Four
Air, Social identity, oriented to self-acceptance: This chakra is called the heart chakra and is the middle chakra in a system of seven. It is related to love and is the integrator of opposites in the psyche: mind and body, male and female, persona and shadow, ego and unity. A healthy fourth chakra allows us to love deeply, feel compassion and have a deep sense of peace and centeredness.

Throat – Chakra Five
Sound, Creative identity, oriented to self-expression: This is the chakra located in the throat and is related to communication and creativity. Here we experience the world symbolically through vibration, such as the vibration of sound representing language. 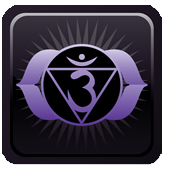 Third Eye – Chakra Six:
Light, Archetypal identity, oriented to self-reflection: This chakra is known as the brow chakra or third eye centre. It is related to the act of seeing, both physically and intuitively. As such it opens our psychic faculties and our understanding of archetypal levels. When healthy it allows us to see clearly, in effect, letting us “see the big picture.” 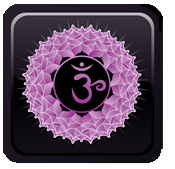 Crown – Chakra Seven:
Thought, Universal identity, oriented to self-knowledge: This is the crown chakra that relates to consciousness as pure awareness. It is our connection to the greater world beyond, to a timeless, space place of all-knowing. When developed, this chakra brings us knowledge, wisdom, understanding, spiritual connection and bliss.

Want to join the discussion?
Feel free to contribute!

Chakra Balancing What is the Purpose of Reiki
Scroll to top