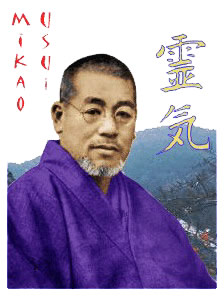 Below is the traditional Reiki history. By this we mean the history that was brought to the West by a lady called Takata. Over the last few years there have been many scriptures found that confirm many of the points below with reference to Dr Usui are incorrect. In many cases the history was elaborated on to allow Westerners to accept Reiki, this was mainly due to the fact the Reiki is a Japanese healing technique that came to the West during the war.

Reiki Ryoho was founded by Dr Usui who was a great friend of the Japanese emperor and a good businessman. In 1914 his career took a turn for the worse and he decided to become a Buddhist Monk.

During March 1922 Dr Usui returned to Mount Kurama where he had studied as a boy. During this retreat he had a Spiritual Awakening. He was shown how to unlock the healing within himself and the healing potential of others. He realised that he could heal other people without depleting his personal energy. He knew this was the power he had wished for as child when he studied healing.

Dr Usui used Reiki on himself to begin with and then on family members. In April 1922 he moved to Tokyo with his family and started a healing society named “Usui Reiki Ryoho Gakkai”. In English this means “Usui Reiki Healing Society”. From there Dr Usui went on to open many clinics giving Reiki treatments and classes. During the war this society went underground and one of Dr Usui’s students Dr Hayashi left the society to start his own clinic.

In 1936 a lady called Hawayo Takata was taught Reiki by Dr Hayashi. Takata was a widow from Hawaii who was very ill and was seeking out other forms of medicine to heal herself and tried Reiki. To receive treatments she worked at Dr Hayashi’s clinic as she was unable to pay for them.

In 1937 Takata went back to Hawaii and Dr Hayashi followed. For the next year they both travelled giving lectures, treatments and teaching. In 1937 Takata was initiated as a Reiki Master, this then enabled her to be able to attune others. Takata became a well known healer and travelled to the US and other parts of the world, teaching and giving treatments. In 1970 Takata began to initiate others into Master level and was charging $10, 000 for the training, which was a weekend class. Takata believed that by charging so much for the attunement of Reiki it instilled Respect. Takata believed that only people of stature should be trained to use Reiki. This was not the belief of Dr Usui as he wanted it to be available to all and not one select group.

When Takata died the 22 Masters she had attuned started to follow their own inner guidance and started charging moderate fees. During the 80s several hundred Reiki Masters charged modest fees meaning that Reiki became much more widespread.

Although Takata kept a real tight rein on what she taught and who was taught, we still need to be extremely grateful to Takata because if it was not for her, Reiki could still be a well kept Japanese secret

Our Reiki courses are approved by the UK Reiki Federation and comply with the National Occupational Standards (NOS) for Reiki and the Reiki Core Curriculum of the Reiki Council. Verification number: 2014-1026P.